Posted by gregwohead on February 25, 2012 in homebrewed, JFDI, things i do |One Comment

Thursday was the very first Homebrewed. I couldn’t have been more pleased with how it went. There was such a lovely, generous, friendly atmosphere, and the stories were by turns hilarious, epic, mysterious and moving. And what a lovely audience!

I intended to thoroughly document the evening with film and photography, but I was a little scatterbrained on the night, so was only able to snap a few shots. The first half of the event consisted of a pair of stories about big experiences: 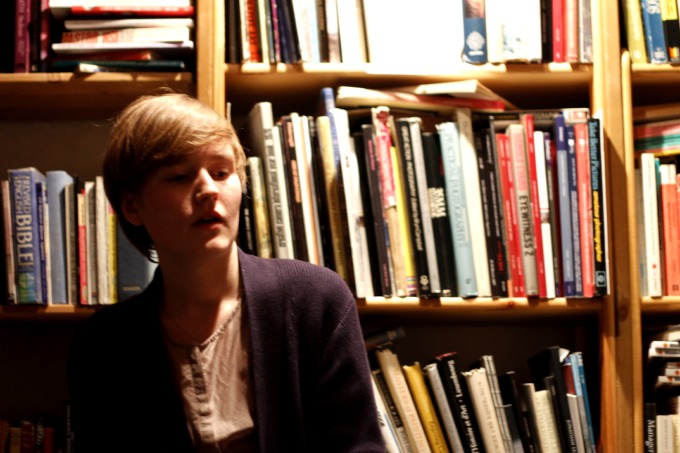 Tiffany Charrington‘s story was called Fissure, about a performance pilgrimage in the Yorkshire Dales. It was a tale of epic landscapes and the singular paths we make through them. And about the people who accompany you along the way.

Stephen Connery-Brown finished off the evening with Cheaper by the Dozen, a story about parents, fertility and pressure-cooked sultanas.

After the stories we all hung around LXV Books browsing, mingling and drinking wine.

Also in attendance was the lovely Vera Chok (she of saltpeter), who took some great shots of the night:

Big thanks to Ryan, Tiff, Cat and Stephen—all super-talented storytellers and an absolute pleasure to work with. And thank you to Sebastian Sandys, proprietor of LXV Books, for helping us make Homebrewed happen. If you have ideas for happenings in the bookshop, get in touch with Seb—his generosity abounds.

Look out for Batch 2 of Homebrewed in the near future. Ideas are already marinating. And get in contact if you’ve got a true tale to tell.

Last—but not least—thank you to everyone who came down to the bookshop to hear stories.